Of the handful of classic Christmas stories, perhaps the most fun to teach (at any level) is How the Grinch Stole Christmas by Dr. Seuss.

You can read the text of the book (minus pictures) in our FREE PDF download: The Best Christmas Stories for Middle & High School.

The Grinch and Ebenezer Scrooge

Seuss’s classic draws heavily upon another holiday tale: A Christmas Carol by Charles Dickens. In fact, of all the seasonal stories in the world, it is these two which have given us characters so full of humbug and misery that their very names — Grinch and Scrooge — have become synonymous with nastiness and bad cheer.

Oh ! But he was a tight-fisted hand at the grindstone, was Scrooge! a squeezing, wrenching grasping, scraping, clutching, covetous old sinner! External heat and cold had little influence on him. No warmth could warm, no cold could chill him. No wind that blew was bitterer than he, no falling snow was more intent upon its purpose, no pelting rain less open to entreaty. Foul weather didn’t know where to have him. The heaviest rain and snow and hail and sleet could boast of the advantage over him in only one respect, — they often “came down” handsomely, and Scrooge never did.

Seuss does not go to great lengths to describe the Grinch, likely because he has the benefit of being able to draw his character in detail. Even so, his character shines through quite clearly as the story unfolds.

The Grinch hated Christmas! The whole Christmas season!
Now, please don’t ask why. No one quite knows the reason.
It could be his head wasn’t screwed on just right.
It could be, perhaps, that his shoes were too tight.

One of the best places to start in teaching How the Grinch Stole Christmas is to compare these two wonderfully wicked characters. Even for students who haven’t read either text, the characters are likely familiar to them by way of popular culture, movies and songs.

But it is not just the ways in which Scrooge and the Grinch are alike that is fascinating, but in the ways they are not. Scrooge, for example, hates Christmas but has no impulse to snatch the season away from others. He simply wants to be left alone. The Grinch, on the other hand, has been left alone, and still he is not content. Only ruining Christmas for the Whos will satisfy him.

Have students compare and contrast the two characters. This can be done in a classroom discussion, but it can also be done by creating two posters: one for Scrooge and one for the Grinch. This allows some artistic creativity, and students can list the similarities and differences on their posters.

The Grinch and The Night Before Christmas

Another text to consider is The Night Before Christmas — originally titled A Visit From St Nicholas by Clement Clark Moore.

This poem from 1823 is arguably the most well-known poem in American history, although most people don’t even realize they’re quoting a poem at all.

‘Twas the night before Christmas, when all through the house
Not a creature was stirring, not even a mouse;
The stockings were hung by the chimney with care,
In hopes that St. Nicholas soon would be there;
The children were nestled all snug in their beds;
While visions of sugar-plums danced in their heads;

The poem goes on. It has been turned into picture books and Christmas cards galore over it’s 100-plus year history.

Its connection to How the Grinch Stole Christmas, however, isn’t in its story but rather in its meter and rhyme scheme.

Both poems use rhyming couplets, and both employ Anapestic Tetrameter.

Anapestic tetrameter is a particular poetic rhythm. It is often used in nursery rhymes and children’s books because it has a nice flowing pattern.

An anapest is a poetic foot that consists of three beats: two unstressed followed by one stressed. Tetrameter refers to the number of poetic feet in a line (four). Like this:

‘Twas the night before Christmas, when all through the house
Not a creature was stirring, not even a mouse;

Most kids aren’t hot on poetic analysis, but even so these two poems can be amusing to breakdown. It’s best to put students into pairs or small groups. Then have each group pick one poem — A Visit from St Nicholas or How the Grinch Stole Christmas.

Working together, the groups can break down the poems by their poetic meter.

Both poems are quite long. We suggest assigning only a certain number of lines: say 20 or so. No point in belaboring the point and ruining the fun.

One way to make this more hands on is to have students write each line of their chosen poem on construction paper. Cut the lines out so each line is on its own piece of paper. Then have the students bold/highlight/emphasize the meter scheme so the stresses can be clearly seen.

Then the lines can be glued together on a single sheet of large poster paper. Give the kids some artistic freedom to decorate and enhance their posters, and this can turn into a fun art project rather than just a boring poetic analysis lesson.

We’ve created a deeper dive into How the Grinch Stole Christmas that is available from Teachers Pay Teachers for $1.99. Click the button below to get the lesson plans.

Scroll down to see what we’ve included.

In this lesson we ask whether or not Dr. Seuss himself was the basis for the Grinch, and we learn a little bit about that fabulous roast beast.

Here we make a quick connection between How the Grinch Stole Christmas, some of its forebears (as we did above) and also note some of the adaptations of the story into other mediums.

In these lessons we interrogate Max the Dog, who never gets a chance to tell us precisely how or why he ended up with the Grinch. This lesson gives students a chance to invent a backstory for old Max.

In this lesson, we ask students to ponder where the heck Santa Claus was all night while the Grinch was stealing presents and trying to wreck Christmas.

These questions aim to delve deeper into the story and ask students to consider aspects that are suggested by the language but not fully explained in the text.

In this lesson we admit that not every Christmas tradition is one you’re going to love. There’s plenty to be merry about at Christmas, but sometimes you have to let out your inner Grinch. This lesson gives students a chance to play the humbug, if only for a little while.

In this lesson, we move away from the humbug and ask students to wonder just what it was the Whos were singing and gives them the opportunity to write their own holiday song.

Get the Lesson Plans

You can get the lesson plans described above at Teachers Pay Teachers for $1.99.

*The story itself is not included. You can download it for free as part of our collection of the Best Christmas Stories for Middle & High School. 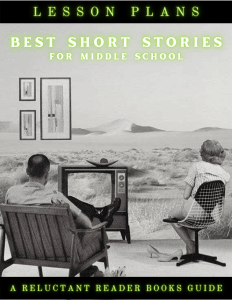